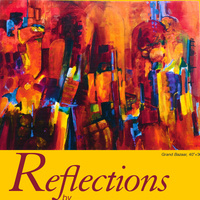 Florence Schwartz Harlan’s paintings are inspired by memory enhanced by interpretation, impression, and emotion. Most images are not visual recordings but capture a “sense of place” rather than specific details. After receiving a Bachelor of Fine Arts degree at the University of Illinois, she taught sixth grade and then completed a master’s degree in education at Cornell University. Her background in both art and education served her well when she designed the Arts and Crafts Program for the Cornell University Student Union. Although her interest in higher education led to a 30-year career at San Francisco State University, painting has always been a major force in her life. She has studied privately and at Cornell University, City College of San Francisco, and San Francisco State University. In addition to solo shows on the Mendocino coast, in Mill Valley, Sacramento and San Francisco, she is represented in private collections in the United States, Europe, Asia, and New Zealand. She has participated in group shows in San Francisco and in northern California where she has won several awards. One of her paintings was selected for a group exhibition at the M. H. de Young Museum in Golden Gate Park, San Francisco.

Gallery190 is open weekdays 9 to 5 p.m. and weekends by appointment.