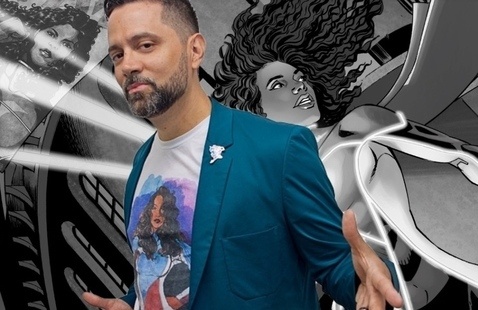 How can we use art to promote social justice and health equity?  How can art be used to explore identity, mental health, and the idea of resilience with communities—especially in communities of color—using art for community education and activation?

La Borinqueña creator Edgardo Miranda-Rodriguez will take part in a special panel discussion for UCSF community members about his creation of the character as a champion of social justice, why representation matters, and how young people can advocate for a more equitable future.

Edgardo Miranda-Rodriguez is a graphic novelist most notably recognized as the writer and creator of the critically acclaimed and bestselling superhero series La Borinqueña. In addition, he is the recipient of the San Diego Comic-Con 2019 Bob Clampett Humanitarian Award for his philanthropic efforts via the benefit anthology Ricanstruction: Reminiscing & Rebuilding Puerto Rico featuring La Borinqueña teaming up with Wonder Woman, Superman, Batman and other DC Comics heroes. He self-published this anthology under his own studio Somos Arte and to date Edgardo has raised close to a quarter of a million dollars for grassroots organizations in Puerto Rico via the La Borinqueña Grants Program. As the Creative Director and owner of Somos Arte, a Brooklyn-based creative services studio he has worked with such notable clients as Atlantic Records, Columbia University, Sony Pictures and Marvel. Edgardo is also an Arts Envoy for the U.S. Department of State giving talks and leading workshops in Latin America about how La Borinqueña speaks to social justice issues as a graphic novel. In addition, Edgardo is a curator of art exhibitions having already produced three original Marvel comic book art exhibitions and his very own La Borinqueña for the Smithsonian Museum and Fundación Cortés in Puerto Rico.

Edgardo continues to be recognized widely for his work on NBC, CNN, The New York Times, Washington Post, NPR and numerous other media outlets for having already produced in addition to his own series La Borinqueña, graphic novels under the Darryl Makes Comics imprint which he co-owns with Darryl DMC McDaniels (from RUN DMC), and the comic book series Freak written by Emmy and Tony award winning writer John Leguizamo. He has also written for Marvel Comics critically acclaimed anthology, Guardians of the Galaxy: Tales of the Cosmos.

This event will be immediately preceded by a separate talk for community educators and students. Find out more about that event at https://calendar.ucsf.edu/event/laborinquena.

Register in advance for this webinar: https://ucsf.zoom.us/meeting/register/tJckcuqpqD0tHtxIQaYIaA881yfnWJtEUjo_