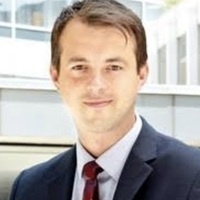 Anesthesia Division of Global Health Equity hosts  a round table discussion with Nicholas Stine, MD. Dr Stine is the national executive lead for population health at CommonSpirit Health, the largest nonprofit health system in the country.

Prior to joining Dignity Health in 2017, he was Chief Medical Officer for New York City's Accountable Care Organization (HHC ACO) and an Assistant Vice President at NYC Health + Hospitals - the largest public health care system in the US - where he led the Office of Accountable Care. Under Dr. Stine's leadership, the NYC Health + Hospitals ACO successfully reduced costs and improved quality in each of its first five performance years in the Medicare Shared Savings Program, making it one of the country's most successful ACOs.

Dr. Stine is a practicing primary care physician in San Francisco with the Dignity Health Medical Foundation, and is an Attending Physician and clinical faculty at St. Mary's Medical Center for the Internal Medicine residency. He was previously an Attending Physician at Bellevue Hospital in New York City and an Assistant Professor in the Departments of Population Health and Medicine at the NYU School of Medicine. His prior work spans the public, private, and nonprofit sectors, including positions with the US House Committee on Oversight and Government Reform, the City of Philadelphia, and the Maryland Department of Health and Mental Hygiene. Dr. Stine has written on medicine and public health in prominent journals such as the New England Journal of Medicine and the Journal of the American Medical Association. He was elected Fellow of the New York Academy of Medicine in 2015, and named to the Crain's New York "40 Under 40" list in 2016.

He trained in Internal Medicine at Brigham & Women's Hospital, where he was a clinical fellow at Harvard Medical School. During his training, he did clinical work in Philadelphia, Boston, New York, the Indian Health Service, Botswana and Haiti. He received his MD from Penn as a Gamble Scholar, and graduated from Dartmouth College as a Watson Scholar.

Questions about the Events Calendar? Check out our FAQ or contact us at calendar@ucsf.edu.
© 2018 The Regents of the University of California. All rights reserved.
© 2018 The UC Regents | FAQ | Contact Us
This event content is powered by the Localist Community Event Platform.