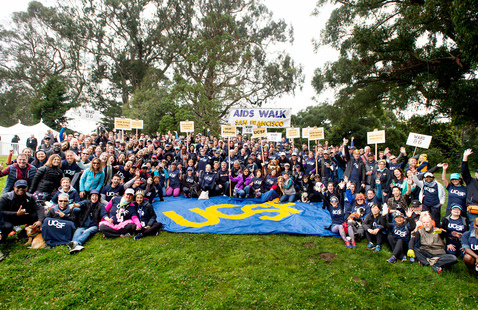 Sharon Meadows, Golden Gate Park View map Free Event
Add to calendar
Save to Google Calendar Save to iCal Save to Outlook

https://sf.aidswalk.net/
View map Free Event
Add to calendar
Save to Google Calendar Save to iCal Save to Outlook

After two years of participating in mostly virtual events due to the pandemic, UC San Francisco is rallying its community to come together in Golden Gate Park for AIDS Walk San Francisco on July 17 to raise funds for programs and services that benefit people of the Bay Area.

At UCSF, about a half a dozen teams have formed that are raising money in a friendly competition to see which team brings in the most money. The team with the highest total of donations wins the coveted AIDS Walk Trophy presented by UCSF Chancellor Sam Hawgood. Memberes of the UCSF community are encouraged to join or contribute to one of the UCSF teams listed below.

As an institution dedicated exclusively to health, UCSF has participated in AIDS Walk San Francisco since it started in 1987 as part of its longstanding commitment to the health and wellbeing of the community.

This year, Francesca Vega, vice chancellor of Community & Government Relations, is leading the charge for the UCSF coalition of teams that has set a fundraising goal of $50,000.

Proceeds raised in the annual 10K fundraising trek this year will go toward the POP-UP program at Ward 86 – one of the nation’s first dedicated HIV outpatient clinics – at Zuckerberg San Francisco General Hospital and Trauma Center and UCSF 360 Wellness Center, which has offered cutting-edge care since 1984, among other Bay Area AIDS-related programs and services.